On the 24 March, four CDL staff (Darrel, Chris, Pamela, and Richard) took part in the CEO Sleepout in Newcastle. We know all too well the devastating impact homelessness has on our communities, so it is something close to all our hearts.

Imagine if you had no home, no food, and nowhere you felt safe. That’s the nightmare facing thousands who have been pulled into poverty or made homeless since the start of the pandemic.

That’s why we wanted to do something about it. On 24 March, we gave up our beds for one night to sleep outside at St. James’ Park – each of us uniting to fight homelessness.

We know our experience doesn’t begin to touch on the reality of homelessness, but raising awareness and even the benefit of our own education on the subject made this more than worthwhile.  We were genuinely blown away by the support we received, right up to and including the night (special mention to the Seagulls who serenaded us throughout the night).  The whole event raised a hugely significant sum of £83,600 and of that, the CDL contribution was £9K.  Monies raised on the evening benefit local charities including Changing Lives & Newcastle United Foundation

Why is it so important?

Recent studies show the shocking truth about homelessness in England: 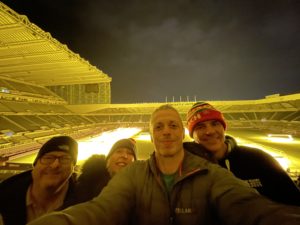